The History of Electric Motors 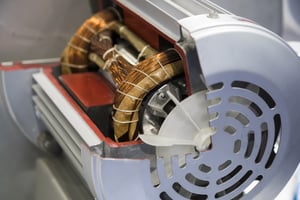 Have you stopped to consider where we would be without electric motors? Today you can find them everywhere, from our cars to our toothbrushes. Electric motors are also used to manufacture the products that make our modern life possible. Since electric motors are so crucial to today, let's explore their history and see how we got here.

Work on electric motors continued throughout the years, and by 1887 the first electric motor-driven trolley was in service in Richmond, Virginia. From there it wasn't long that other electric motor applications were developed, and in 1892 electric elevators could be found in buildings and other structures.

Soon after that, electric motors found their way into industrial applications. Before this time, industrial processes were powered by belts or shafts that distributed the motion from compressed air, steam, or hydraulic pressure.

Setting up a process, or modifying one, could be a labor-intensive and lengthy process to get the power distribution in place. It was expensive and slow.

Electric motors changed that. Suddenly each workstation or process could have its own source of motion, away from the distributed belts and shafts. This greatly simplified the industrial process, allowing equipment to be built that could take full advantage of available space.

This newfound capability of stand-alone equipment allowed the shops to hire more people for the average factory. It was also safer since the need for the distribution through belts and shafts were removed. No longer was the factory a maze of dangerous mechanical power distribution.

Electric control systems were soon developed for the motors. This fine control capability allowed for specialty equipment to do jobs that were difficult or impossible in the past. Machines were refined to take advantage of this capability, and soon a new class of products was available on the market.

Thanks to the electric motor, we had more jobs, better equipment, and new processes that created new products and markets. The industrial revolution was upon us.

Electric motors were not limited to just industry in those early years. Soon they were used in mills, replacing animal and hydraulic power. Many water pumping applications made the switch to electric motors.

Transportation embraced the electric motor as the power of choice. Soon ships and locomotives replaced steam power with electric motors, and they never looked back. Electric motors were everywhere.

Electric motors are still everywhere today. The Department of Energy estimates that half of the nation's power grid is used to power the electric motor.

From its humble beginning, the DC electric motor has evolved into a heavy-duty device that packs a tremendous amount of starting torque in an efficient package. DC motors are also used in high-speed applications.

Over the past 30 years, controller technology for AC motors has dramatically evolved. Today, these precise controllers have given AC motors new life as they can significantly increase their efficiency and power output.

The technology is still being developed, and the future of electric motors looks to be bright as we move our personal vehicles from fossil fuel engines to clean electrically-driven motors.