The Automation of Control 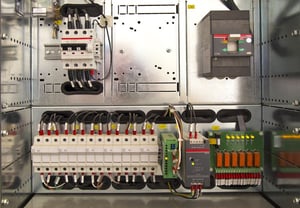 There are a few ancient principles that played roles in automation since the mechanical age. Automation did not have to wait for electronic or electrical systems. The concept of automation as a wish or fantasy dates back as early as 762 BC. In Homer's epic poem "The Iliad," the God of blacksmiths, Hephaestus, was depicted as inventing automatons, self-directed machines, to speed the manufacture of weapons, machines replacing human labor. Human beings have held the idea of automation in our collective consciousness for thousands of years. Inventors were working on mechanical forms of automation for centuries.

Related Blog: How to Use Automation to Save Energy in Manufacturing

Feedback loops or systems for feeding back information to the controller of actions about the effect of the action were part of automation since the 17th century.  In 1757, a French inventor devised a feedback device to control the temperature of incubators. The sensor was a float in a tube of mercury. As the temperature rose, the expanded mercury carried the float. The float was mechanically linked to doors that increased or decreased the air draft to a furnace increasing or reducing heat output. The invention of the thermostat followed and these devices provided feedback to many heat-reliant or dependent systems.

The steam engine governor was developed by James Watt in 1788. The steam from the engine drove a device that widened from centrifugal force and opened a valve that controlled air pressure or steam pressure to regulate the speed of the engine. In the first half of the 20th century as manufacturing, shipping, sea travel, and other power industries developed many kinds of automated controls and automated switches appeared using measurements of the process to control the process.

Eventually, problems arose with many mechanical controllers because their precise principles of operation were not well understood. Controls became a de facto branch of mechanical engineering. The Industrial Instruments and Regulators Committee of the American Society of Mechanical Engineers was formed in 1936.

Electricity provided many more handles for inventions in the field of automated controls. In the 1930s the automotive industry was applying feedback controllers. They had developed mechanical ways to measure aspects of the manufacture and finishing process and feed those measurements back to the switches and devices that controlled the manufacturing line to make corrections and improvements to the process.

Much of the development of electric automated controls occurred as a consequence of World War II. In the early 1940s, proportional-Integral-Derivative (PID) controllers were developed to control the processes in closed loop systems. These devices do continuous comparisons between an ideal value that the operator sets into the controller and the actual environmental value.

If the two values are not the same, the controller declares that an error has occurred and initiates or switches on a device that adds the corrective factor (like more heat for instance) until the set value and the actual value match. During that same period, servo type devices were developed that could use radar to target German rockets.

In the 1970s, the practical development of the digital computer and digital technology, the invention of mechanical memory, and programming systems added an additional dimension to the automation of controls. Those potentials allowed for programming of the type that went into devices like VCRs, where instructions could be linked to time and sequence. Computer technology introduced the idea of stringing instructions into a sequence and enabling machines to evaluate conditions to make choices.

For the first time, machines and controls could be addressed in written formal languages which were developed based on linguistics. Eventually, machine decisions could be made on the basis of data coming into the controls systems via electronic senses or information from the internet or the cloud. Machines were provided with sensory systems as well as the capacity to make decisions based on data and make the decisions in real time.