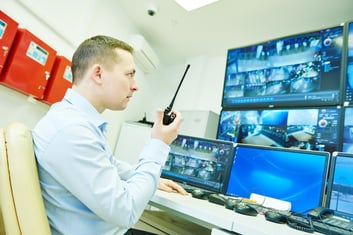 Every SCADA, supervisory control and data acquisition unit contains a number of subsystems that are used to carry out a variety of functions within the unit. The following are common system components:

Related Blog: Smart Sensors and Control in the Age of Industry 4.0

Remote Terminal Units are used to connect the sensors to convert their signals into digital data. They contain telemetry equipment which can send digital data to the supervisory system, while also being able to receive commands back from the system. Often, embedded control capabilities which include ladder logic are contained within RTUs so that they can perform boolean logic operations.

Programmable logic controls are also used to connect the sensors and convert signals to digital data. PLCs are capable of even more refined embedded control capabilities than RTUs. They do not contain telemetry hardware. They are occasionally used instead of RTUs in the field since they cost less, are versatile and flexible, and able to be configured.

The system is used for connecting PLCs and RTUs through control centers, data warehouses as well as the enterprise. Some examples include WAN circuits and telephone lines. Wireless media used in the SCADA telemetry system include VSAT, radio (licensed and unlicensed), cellular and microwave.

This is a software service which makes use of protocols within the industry in order to connect services through telemetry using devices such as RTUs and PLCs. Data can be accessed using standard protocols from these field devices.

The human machine interface is a device which is responsible for presenting the processed data to the human worker. The aim is to facilitate an interaction between the machine and the human in charge of the process. The HMI can be thought of as a customer that requests data from the acquisitions server. Many installations make use of HMI as the graphical interface which can collect data from external devices, create reports, sound the alarm and notify relevant authorities and similar activities.

A piece of software which is used to collect time stamped data, boolean events and alarms in a database which can be used to create graphic trends in the HMI. Again, the historian acts as a client requesting data from the acquisition server.

It gathers data on multiple parallel processes and sends commands to the SCADA Industrial Control System.

In addition, SCADA also contains communications infrastructure which connects the supervisory unit to the remote terminals. Various processes and analytical instrumentation also form a part of the whole system.