How are Robots Used in the Manufacturing Industry? 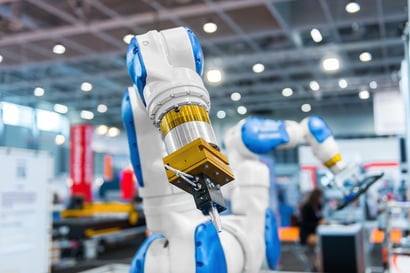 The industrial revolution brought about great changes within the manufacturing industry. It introduced the idea of using machines to increase production while lowering costs. Today, the machines take the form of robots controlled by increasingly sophisticated forms of artificial intelligence. Let's take a look at the different roles of industrial robots in manufacturing.

Related Blog: Is it Time to Upgrade Your Industrial Control System?

5 Ways Robots Are Used in Manufacturing

Throughout manufacturing, robots have found niches in areas that require precision and consistency. These are 5 of the most common spots you might find robots performing their jobs in the manufacturing process.

Robots are being used to handle a steadily widening range of products from blood samples to large crates. Mainly products and materials that require steadiness or dangerous product that could risk contamination if in contact with humans.

The robots never get tired or make a mistake while performing their basic function, and this solution also reduces the dangers of putting human workers’ lives at risk. More work is completed via robots, and less number of workers are required to oversee the operation.

The process of joining metal pieces together with the application of heat and pressure is a dangerous one that requires exact precision. The slightest mistake made by the welder can result in serious injury, spoil the metal piece, and disrupt the production process.

For these reasons, robots are becoming a popular choice for welding jobs. Depending upon the complexity of the project, work can be done entirely by robots or with the assistance of a human worker.

Having to assemble product parts is a long, repetitive job that can be easily disrupted by a lapse in judgement, a bored mind, and many other factors that are uncontrollable.

By replacing such a system with a robot, the process becomes much more streamlined and the possibility of an error occurring is significantly reduced. This also frees up the human component of the assembly process to focus on quality rather than quantity and takes them away from the most dangerous part of the process.

For processes which require glue, paint, or sprays to be applied to a surface, dispensing robots are placed at a strategic point near the path of the product. This is another instance of a repetitive job that can be better handled by a robot than a human worker simply due to lack of errors.

There are certain products that have to undergo a specific type of processing, such as carving, polishing, or sawing before being released. This work is done by robots with varying degrees of autonomy, depending upon the complexity of the task and the capabilities of the robot.

Thus, we see that robots form an inalienable part of the modern manufacturing landscape. As machines continue to evolve and take on increasingly complex tasks, the day is not far off when entire factories will become fully automated and all the work will be done by robots.