Generators: How do you make electricity without batteries? 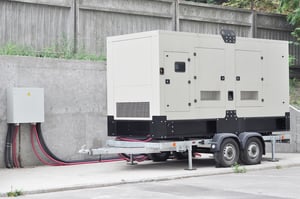 English inventor, Michael Faraday was interested in magnets. In 1822, he invented a simple motor experimentally. His simple device made a coil of wire revolve around a permanent bar magnet when the wire was connected to a battery. The coil always moved to align itself with the poles of the magnet. In essence, the coil became a magnet itself.

The first electrical devices relied on batteries. Nine years after Faraday demonstrated the motor he discovered the principle of electromagnetic induction. He used his simple motor apparatus to generate an electric current which could register on a galvanometer. When he moved the permanent bar magnet back and forth inside a coil of wire, he generated electricity. Instead of the stationary magnet forcing the movement of the coil when electricity was passed through the coil, moving the magnet through the stationary coil generated electricity in the coil. The relationship between electricity and magnetism is very intimate.

The magnetism pulls electrons in the wire to move to create an electric current (a current of moving electrons). Moving a magnet through a coil generates electricity in the coil. It doesn't matter how the motion is created. It could be through water power, steam power, gasoline power, coal power, nuclear power, energy sources of any kind that force motion can make magnets move through coils. Electricity is a kind of least common denominator of all the energy sources on the planet. Mechanically, motors and generators became more and more sophisticated, more efficient, and larger, heavier and more powerful since 1831, but the principle hasn't changed.

The kinds of self-contained generators on the market are largely differentiated on the kind of fuel they use to move that coil through that magnet through that coil.