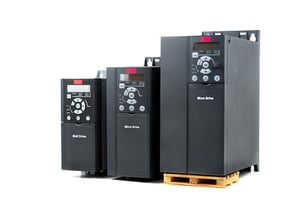 In his June 2018 article at Pumps and Systems, Dan Peters did some comparisons of the practicality of replacing the traditional PLC (programmable logic controllers ) with the more advanced VFD (variable frequency drive) in embedded pump applications. While advances in processor and memory technology have benefited both types of controllers, programming limitations inherent with PLCs may make them as obsolete as the candle after the invention of the light bulb for controlling 3-phase induction motor applications.

Related Blog: FAQ's all about VFD's

Ironically, the PLC has traditionally been considered a critical component for controlling the very VFDs which are now advanced enough to eliminate the need for PLCs. That's good news for industrial plants which will benefit from reduced wiring, saved space, lower costs, and decreased programming complexity. PLCs are commonly used for PID (proportional-integral-derivative) loops, which are logic programs for determining the required pump motor speed. In layman's terms, the program is simply a set point, feedback, and tuning loop. The PLC has traditionally been used to process these data points and then provide an analog output as the speed reference for the VFD which ultimately controls the motor speed.

Steve Peterson of Yaskawa America was forecasting the elimination of PLCs by VFDs as far back as 2014 with his article at Pumps and Systems. Steve noted that even entry-level VFDs already have their own PID loop. Set points can be entered directly to the VFD's programming and the PID is easily configured with only a small number of parameters. Feedback in the PID loop is accomplished via a transducer which is sent via the VFD's analog input. The simple loop performs the logical function of determining whether the motor needs to speed up or slow down to meet the setpoint, maximizing energy efficiency.

The need for the decision-making function of the traditional PLC is eliminated and with it the cost, space, and wiring a PLC requires. Peterson goes on to explain that the PID loop is just the simplest of functions possible with the advanced processing capabilities of today's VFDs. More advanced VFD applications include:

While pump applications have been used as an example it's obvious that these same parameters can be used with any other industrial applications using 3-phase electric motor control, since motor conditions provide the parameter inputs for the VFD.

For plant operators, the trend of VFDs replacing PLCs is certainly good news. Savings accrue in the form of reduced procurement costs, and operations are enhanced by improved control of setup, programming standardization, and available technical support when needed. VFD manufacturers are improving their technology all the time, and while VFDs haven't completely replaced PLCs yet, that day is certainly on the horizon.

At Mader Electric we've been keeping industrial enterprises up and running for over 100 years and we've made it our mission to help you stay on the leading edge of motor and control technology to keep your operation at peak efficiency for the next 100 years. We also provide the full range of training, preventative and emergency maintenance, and electrical services so don't hesitate to contact us.